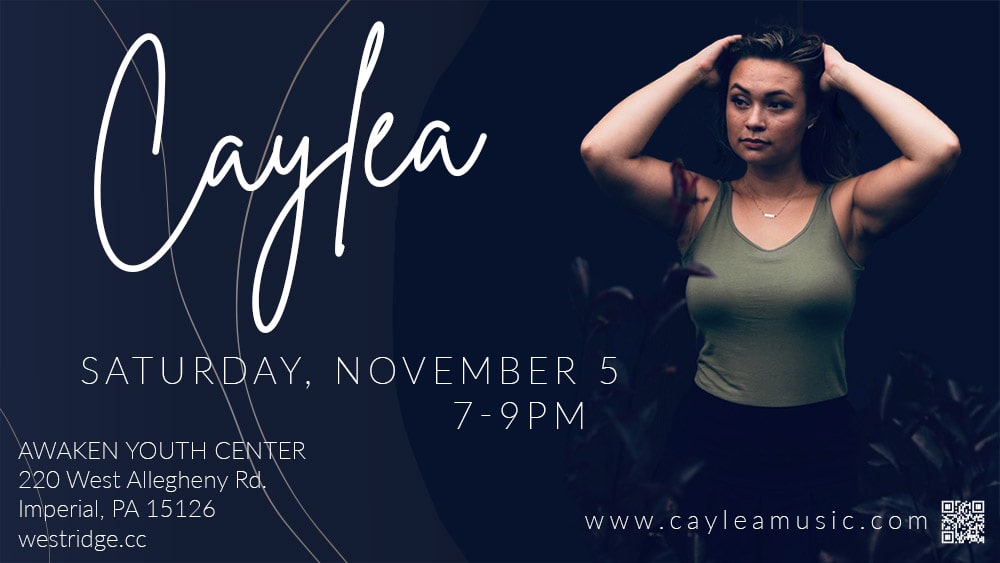 Caylea, a now-local R&B-Pop artist coming from the music industry in Nashville, TN, will be putting on a FREE show at the Awaken building on Saturday, November 5 from 7pm to 9pm! She will be playing a lot of her original music (both released and unreleased songs) and hanging out afterward to meet and talk with people, so stick around. Invite your friends – anyone and everyone is welcome, but there is limited seating!

Caylea has breathed music practically since birth and grew up all over the world as a military kid. It all started with piano lessons from her mom in toddlerhood. At age 14, she entered an Air Force-wide songwriting competition and won first prize, which allowed her to start building a home studio. She taught herself how to produce her own music throughout high school, releasing an EP, which she wrote, produced and mixed. That EP landed her a spot in Belmont University’s industry-renowned songwriting program, which took her to Nashville and LA. She has since steadily honed and cultivated her crafts of songwriting, vocal expertise and music production.

Caylea’s music is a unique blend of an R&B, Pop and Hip-Hop sound and lyrics that are drawn from deep issues in her personal life, often inspired by her Christian faith. Her production style threads together heartfelt acoustic elements with traces of neo-soul and contemporary R&B landing on her head-bopping pop beats. She has spent the past few years traveling with her military husband, who she met in Germany in high school, while continuing to write and produce from her home studio. Caylea’s past music releases consist of two earlier EPs and several singles, including a few recent releases in 2022. Continuing to record from home, she is now gearing up for new music releases in the remainder of 2022 and early 2023, while performing live around the Pittsburgh, PA area.

For the easiest way to stay up to date on our upcoming events and more, subscribe to our eNews.